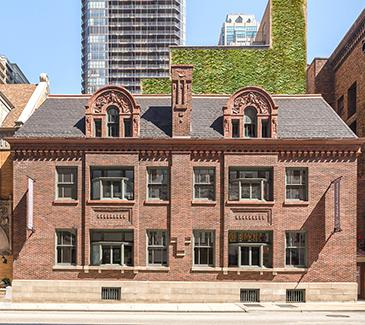 10 E Ohio is ideally situated in Chicago’s thriving River North neighborhood. Originally established as an art colony in 1894, this Queen Anne-style landmark building is part of the rich history of the Tree Studios Building and Annexes. Today, 10 E Ohio is a distinctive retail and brand showcase opportunity. This property’s 70’ of frontage offers tremendous exposure to nearly 33,000 vehicles daily along Ohio Street, one of the city’s busiest arterial streets, as well as significant pedestrian traffic. The property is immediately adjacent to Bloomingdales Homestore, two blocks from Michigan Avenue, one block from  Eataly, and just a short walk from The Shops at North Bridge.

Between 1894 and 1913 Judge Lambert Tree and his wife, Anne built Tree Studios as an artists’ colony in the backyard of their Wabash Avenue mansion. Ardent supporters of the arts, the Trees constructed the studios following the 1893 World’s Fair in hopes of enticing visiting artists to stay.

The original building—which stretches along State Street—was designed by the Parfitt Brothers in English Queen Anne style, with skylights and large windows that allow natural light to flood the studios. To foster a community environment, contiguous studios featured connecting doors and shared a common courtyard. The two-story structure’s steel frame is covered in cast iron at street level and Roman brick on the upper half. Among its many architectural details the intricate sculptures flanking the entrances on Ontario and Ohio Streets are believed to be likenesses of Lambert and Anna Tree.

In 1912 and 1913, the Annexes along Ohio and Ontario Streets were completed, enclosing the courtyard and bringing the total number of studios to 50. The annexes reflected the influence of architects Frank Lloyd Wright and Charles Rennie Mackintosh, and are among Chicago’s best examples of the English Arts and Crafts and the European Modern styles.

While the studios were designed for painters and sculptors, over 500 artists from an array of disciplines lived and worked there over time. Famous former residents include sculptors Albin Polasek and John Storrs who created the Ceres statue atop the Board of Trade; illustrator J. Allen St. John, illustrator of Edgar Rice Burroughs’ Tarzan books; muralist John Warner Norton; painters Ruth Van Sickle Ford, James Murray Haddow, and Pauline Palmer; actors Peter Falk and Burgess Meredith; and Marya Lilien, interior designer and professor at the School of the Art Institute.

By 2000 the studios—along with Medinah Temple—had become derelict. The World Monuments Fund listed the entire block on its World Monuments Watch List following concerns that the complex, which was both Landmarked and listed on the National Register of Historic Places, would be demolished to make way for new construction. The City of Chicago partnered with Friedman Properties to save both endangered structures. The financial and physical challenges were enormous, but the opportunity to preserve an entire historic city block was unprecedented. Friedman Properties purchased the buildings in 2001 and spent nearly five years bringing the buildings up to modern safety standards and restoring their historic integrity.

Architectural details were recreated from surviving fragments. Windows and skylights were restored, bringing back the natural light so prized by earlier generations of artists, and the courtyard was transformed from a jungle of weeds into an oasis in the center of the city.

Today, Tree Studios is predominantly home to a thriving community of artists and artistically oriented businesses.