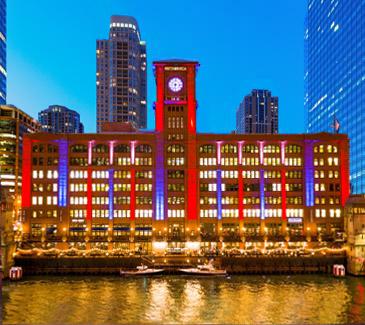 325 N LaSalle, constructed in 1914, was designed by George C. Nimmons for Reid, Murdoch & Co. one of the country’s largest wholesale grocers. Reid, Murdoch & Co. used the building for corporate offices and warehouse space, with several floors dedicated to manufacturing and processing various foods: cheeses, coffee, catsup, sugar, fish, bread, and pickles. The building even included a humidor where tobacco was rolled for cigars. The riverfront site enabled Reid, Murdoch & Co. to ship and receive goods via a supply chain that connected steamers on the building’s south side to railroad spurs on the north side. Under LaSalle Street, the building’s shipping platform was used to load trucks that delivered to merchants all over the city. The building even connected with the city’s downtown freight tunnel system, 60 feet below street level.

A notable example of the “Chicago School” of Architecture, the building’s design features a red brick façade with decorative terra-cotta embellishments covering a steel and concrete skeleton. Originally the building was symmetrical, with 6 bays of windows flanking the center tower on both sides. In 1926, one bay on the west end was removed allowing the City to widen LaSalle Street.

The City acquired the building in the 1950's where it housed the traffic court, the States Attorney’s office and other municipal offices until 1998, when Friedman Properties acquired it.  Friedman painstakingly rehabbed the building, restoring and preserving historic elements, and while modernizing it with new entrances, elevators, and upgrades to the electrical, mechanical, plumbing and communication systems.

The building seven’s floors of office space with retail tenants on the first floor, capped by the building’s distinctive, four-sided clock tower. The two level river walk provides a convenient scenic walkway for public use and a patio where River Roast patrons can enjoy a unique outdoor dining experience.

The building is a designated Chicago landmark and is listed on the National Register of Historic Places. First class retail tenants include River Roast, The Kitchen, and The Rug Company.