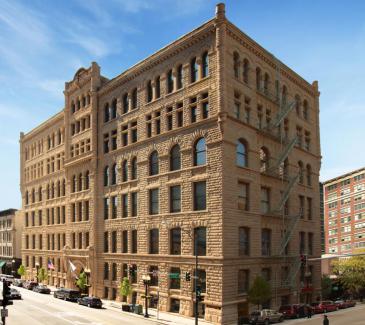 Prior to the Chicago fire of 1871, Chicago’s North Market Hall stood on the spot where Court House Place is today. The popular public market and meeting house was the scene of daily commerce and public assemblies, including one in 1854 during which Senator Stephen A. Douglas attempted unsuccessfully to explain his support for the Kansas Nebraska Act to a hostile anti-slavery crowd.

In 1872, after the Market Hall burned in the fire, Cook County constructed the first Criminal Court and County Jail building, which was designed by Armstrong and Egan. The building, which rapidly developing Chicago would quickly outgrow, was the site of notable trials including the insanity hearings of Mary Todd Lincoln in 1875, and the infamous Haymarket trial of 1886. Following the Haymarket trial, four of the eight convicts were hanged in the alley between the court house and the jail. (The surviving four were eventually pardoned.)

In 1892, the County demolished the building to construct the present larger one, which housed the Cook County Criminal Courts for 35 years. This was the site of many legendary trials: the 1924 trial of Leopold and Loeb, famous because of attorney Clarence Darrow’s success in sparing the two confessed murderers from the death penalty; and the 1921 trial following the infamous Black Sox Scandal, during which White Sox players were banned from baseball for intentionally losing games, but acquitted of criminal charges when key evidence—including signed confessions—went missing prior to the trial. Other trials that occurred here have become local legends, such as the trial of “Terrible Tommy” O’Connor, who was sentenced to death in 1921 for killing a police detective, but escaped from the jail behind the building four days before his scheduled execution. Although he was never captured, the County reputedly kept gallows for years in case he was found. In a well-publicized case at the turn of the century, sausage manufacturer Adolph Luetgert was accused of murdering his wife and placing her remains in his sausage making machinery, an event that caused a marked decline in sausage consumption in Chicago. The building’s list of infamous visitors included Al Capone, who was often brought in for questioning but never brought to trial here.

The building was not famous for criminals alone. A small room reserved for reporters on the fourth floor gained national attention in 1928 when former Chicago reporters Ben Hecht and Charles McArthur wrote the play, "The Front Page," based on their reminiscences of covering trials in the building. As a tribute to its origins, the original Broadway stage setting of "The Front Page" was designed to duplicate the original pressroom at 54 W Hubbard. In addition to Hecht and McArthur, many other notable authors of Chicago's literary renaissance of the 1920s spent time in the fourth floor pressroom, among them Carl Sandburg, Sherwood Anderson, and Vincent Starrett.

The building was listed on the National Register of Historic Places on November 13, 1984 and later designated a Chicago Landmark on June 9, 1993.

The Criminal Courts vacated the 54 West Hubbard Street building in 1929 for larger quarters, and the building was subsequently occupied by the Chicago Board of Health and various other city agencies.

After years of neglect and poor alterations by the occupants, Friedman Properties acquired the property in 1985 and painstakingly restored and refurbished the building which is now occupied by office tenants.