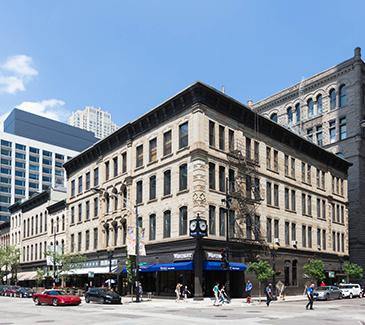 Real estate investor H.H. Magie built this stone-fronted store and office building in 1872, no doubt anticipating the erection of the Criminal Courts Building immediately to the east. Not surprisingly, the building became home to several law offices upon completion. Designed by architects Bauer & Loebnitz, the elaborately detailed sandstone facades and well-appointed interiors made the Magie Building comparable to the Loop’s finest buildings. In 1875, Magie gave part ownership to his son-in-law Lambert Tree, who is well-known in Chicago history for erecting the landmark Tree Studios on State Street between Ohio and Ontario, another Friedman property.

Although not evident on the façade, the interior of 70 W Hubbard incorporates a large two-story hall originally intended for lodge meetings and large public gatherings. This hall was used at the turn of the century as the distribution headquarters of Essanay Studios, a pioneer moviemaking firm whose performers included Gloria Swanson, Wallace Beery, and Charlie Chaplin.

In the 1920s, the building’s retail storefront at 66 W Hubbard was the location of the legendary "Noose Coffee Shop" a popular hangout of newspaper reporters, attorneys, and other habitués of the Criminal Courts Building. Restaurant owner Joe Stein lined the walls with photographs of famous criminals tried in the Criminal Courts Building and was for many years responsible for preparing the "last meals" of criminals scheduled for hanging in the alley between the courthouse and the adjacent County Jail.

Today the building is home to office and retail tenants.