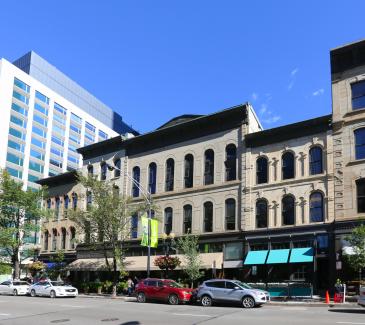 This narrow stone-fronted building was erected in 1872 as the store and warehouse of G. Dassler's china, crockery and glassware business. For a brief period in the 1920's, the building was home to the famed "Hobo College" an educational and social institution that offered Chicago's transient workers lectures, a library, musical events and recreational activities. Many of the students were highly educated migrants. In fact, it is believed that the Hobo College debate team once challenged the team from the University of Chicago and won.

Built in 1871 by manufacturer Samuel G. Taylor, 445 N Clark duplicated a structure destroyed by the Chicago Fire. It included ground floor retail, second floor offices, and a large top floor assembly hall. The simple sandstone façade typified the work of building architects, Edward Burling, one of Chicago’s pioneer architects, and Dankmar Adler, who later gained fame partnering with Louis H. Sullivan in designing the Auditorium Theater and other landmark structures. At the turn of the 20th century, the top floor hall was used as a dance studio, and in the 1920s operated as a "taxi dance hall," where patrons could buy dance tickets for ten cents each which could be presented to a taxi dancer who would accompany them for a single song.

Designed by Architect William Arends, this narrow structure features “two faces”: a sandstone façade on Clark Street and a face-brick and stone façade on the alley side, which owes to the back of the building’s visibility over the squat Cook County Jail formerly situated immediately to the east. Built in 1872, 447 N Clark was originally occupied by the wine and liquor dealers Hartung, Klussman & Nelson. In the 1920’s, during prohibition, it was the warehouse for Old Rose Distillery and the scene of an attempted heist by gangster "Ragtime” Joe Howard. While loading barrels into a truck parked in the alley, Howard was apprehended by police from the Chicago Avenue station. He was tried and acquitted at the Criminal Courts Building, just feet from the crime scene, but his luck ran out in 1924 when he was murdered during a barroom dispute with Al Capone.

Completed in 1872, original occupants of 449 N Clark included a meat market, a plumbing business and the grocery firm Joyce and Cunningham. Designed by architect O.H. Placy, the exterior is common brick made to look like expensive face-brick by coating the surface with yellow stucco and painstakingly applying false mortar joints by hand. Although largely worn away, close examination of the brickwork reveals traces of these false joints, many of which do not even align with actual brick joint lines.

Today the four adjoining buildings are home to Frontera Grill, Topolobampo, Xoco, Bub City, and Three Dots and a Dash, along with office tenants on the upper floors.